Fighting Free from My Comfort Zone 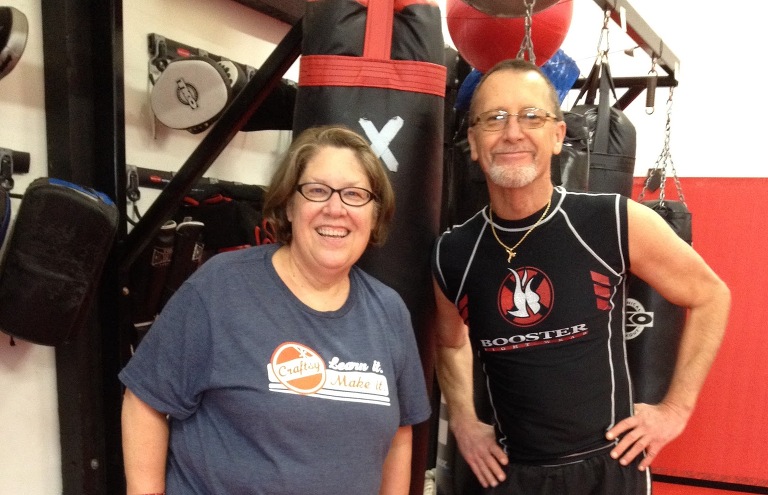 When I retired a few years ago, I had a vague idea about how I would spend my time. I knew walking and yoga were things I would do, as well as riding our tandem. But I got talked into doing something I never even considered participating in – fitness kickboxing.

My yoga teacher and her husband bought a building for their joint businesses – yoga on one side, and mixed martial arts (MMA) on the other side. Rita, whose son is the MMA guy, called me and another yoga friend and said we should come down and try the fitness kickboxing class. I couldn’t imagine myself in a gym doing whatever it was you did in that kind of class, but in the spirit of friendship, I figured why not? 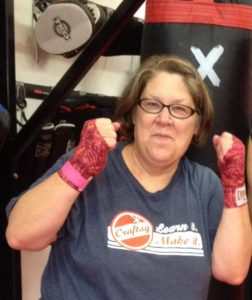 The first time in the gym was weird. Apparently, we got our own boxing gloves with a membership. Mine were red. We had our hands wrapped the way the professionals wrap so we wouldn’t hurt our hands when we were punching. Punching. I was going to be punching things. The warm up had me in a serious sweat, and we hadn’t even started doing anything hard! We learned how to hit and kick the heavy bag the right way, and believe me when I say that when you do it wrong, you know it. About half of the hour class was spent on the heavy bag, and or doing punching drills with a partner using focus mitts. There is something about holding the focus mitts level with your face while your partner punches them that keeps you on your toes. The second half of the class was circuit training, followed by ab work and a cool down. I was one sweaty, quivering mess at the end of that first session, and when I got home I sat on the couch and wondered what the heck had just happened…

But I went back. Our coach was a fan of really LOUD music, and that’s what was cranked up until one of the other yoga gals brought in an acceptable playlist, and then we alternated music. I got better at what I was doing, finding I wasn’t as winded as I had been. And my core strength improved – one of the circuit exercises was grappling with what I called the inert dummy, a torso that weighed about 45 pounds. The object of the drill was to have the inert dummy put on your stomach, roll to a side and punch it about 10 times, roll back to center, punch, and roll to the other side and punch – we did this for two minutes. One day I realized I was rolling without a grunt or much effort – I was getting there! 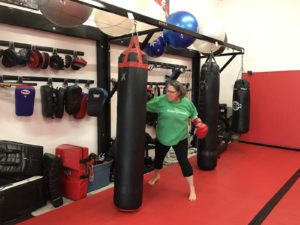 I worked out at the gym for two years, until I began having problems in yoga with my SI joint on the side where I kicked the strongest.  The day I got the diagnosis, my Medicare card arrived in the mail. I ended up in physical therapy, which led me to working with a personal trainer. I currently workout with another coach at a private studio, and he gave me exercises that gave me back the mobility I had lost on my right side due to that injury.

What started out as a completely foreign concept – kickboxing – turned out to be one of the best choices I ever made as far as exercise goes. And it turns out I enjoyed hitting and kicking things, and got in better physical shape because of it.  As far as challenging my comfort zone, there’s one more thing; I attended an evening event, a cage fight. The owner of the gym was fighting on his 40th birthday, so a few of us headed to the fights. Enlightening, to say the least. And those cage girls holding the signs and walking inside the ring? They’re real!

The moral of the story is this: give something new a try. You may be pleasantly surprised, and it may lead you to other activities or sports that might have never hit your radar.

« Maybe I Can?
Breaking Into Backpacking »