Pushing Your Limits and Knowing When to Stop Pushing 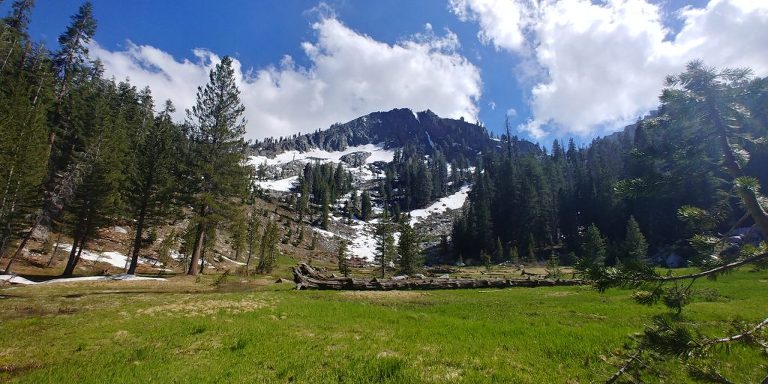 The summer of 2019 was a big hiking season for me.  I was hiking at least once a week and was pushing myself to do longer hikes with bigger elevation gains, and I did most of these hikes with my 30+ pound toddler on my back.  In June of that summer we headed up to Mineral King, inside of Sequoia National Park.  Mineral King has been described as a backpacker’s paradise.  I wasn’t backpacking, but I had the weight of a backpack with my daughter on my back.  Mineral King is breathtaking, with waterfalls everywhere!  We decided to hike up to Mosquito Lakes, about seven miles round trip and 1500’ elevation gain.  This was going to be my biggest hike yet!

It was a big snowpack year and the waterfalls were abundant.  There was still snow on the ground and the hillsides were seeping with water in some parts.  We made it up to our first creek crossing, where the trail led off the side of the hill to a semi-flat part of the trail.  We were doing great until this point.  We all crossed the creek using some downed logs, and then we lost the trail.  This section of the trail was still snow covered.  We followed the creek for awhile until we found the trail again.  But time after time we lost the trail to the snow-covered forest.  We eventually found our way out of the forest to this spectacular meadow.  We could hear a waterfall nearby, so we made our way over to it. 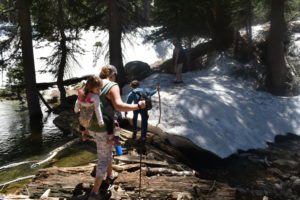 By this point it was time for lunch and everyone was tired, but I was determined to find these lakes.  We had lunch at the bottom of the waterfall, and I could see the trail leading up the hill to the top.  I was sure the first lake had to be at the top of that hill.  While my party rested, I took the short but steep trek up the hill to the top of the waterfall, only to find another snow-covered forest floor.  There was no lake in site, and more importantly, there was no trail in site.  The ground was completely covered in snow.  I had to accept defeat.  I was not going to find the lake on this day.  My party was tired, and I was tired too, although I didn’t want to admit it.  It was a hard decision to make.  I felt like we were so close to the first lake, but without being able to see the trail, I was afraid we wouldn’t be able to navigate through the snow again.  Plus, we still had to hike all the way back down.  It was a tough call, but one I knew I had to make, for the safety of everyone hiking with me that day. 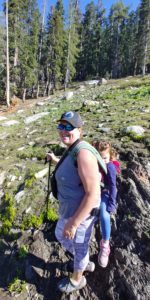 While it’s important to push yourself, because you know that your body and your skills are capable, it’s also important to be realistic when you hit roadblocks.  There were so many times we lost the trail and were able to meander our way across the forest until we found it again.  But now we were at a point when it just wasn’t advisable to continue.  We had to turn around at this point and head back down.  It was still an amazing hike.  We saw so much untouched beauty up there.  And it is still on my bucket list to try again another day, maybe when there’s a little less snow on the ground.

« Limits? We don’t need no stinking limits…
Maybe I Can? »